Crete: Top tourist attractions that you should visit

Is Crete worth visiting?

Extreme sports to do in Crete

Crete: Top tourist attractions that you should visit 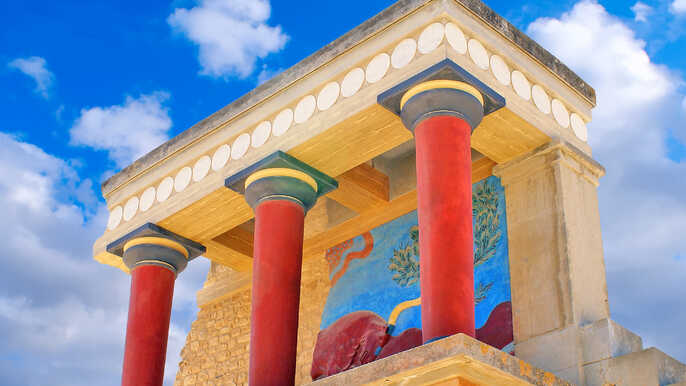 Palace of Knossos in Heraklion, Crete

1. Palace of Knossos in Heraklion

The Palace of Knossos in Heraklion Crete is located only 5km (3 miles) south of Heraklion and is the best-known Minoan site in Crete. Knossos Palace is also often associated with the legend of the Athenian hero Theseus killing the Minotaur. The great Knossos Palace was built between 1700 and 1400 BC, and it was devastated once and for all by fire. The main function of the palace is still under debate. For sure, it is an impressive scenery that leaves you speechless.

Some of Crete’s tourist attractions require more effort to enjoy than others, and Samaria Gorge is one of those. Located in the National Park of Samaria in the White Mountains (Lefka Ori), this stunning and breathtaking gorge is a ten-mile downhill hike that ends at a black-sand beach in Agia Roumelli on the Libyan sea. It passes through forests of ancient cypresses and pines, then cuts between vertical cliffs through the mountains. This hike can take between four to seven hours depending on a person’s speed and fitness level. It’s a true gem hidden in Crete’s beautiful nature. 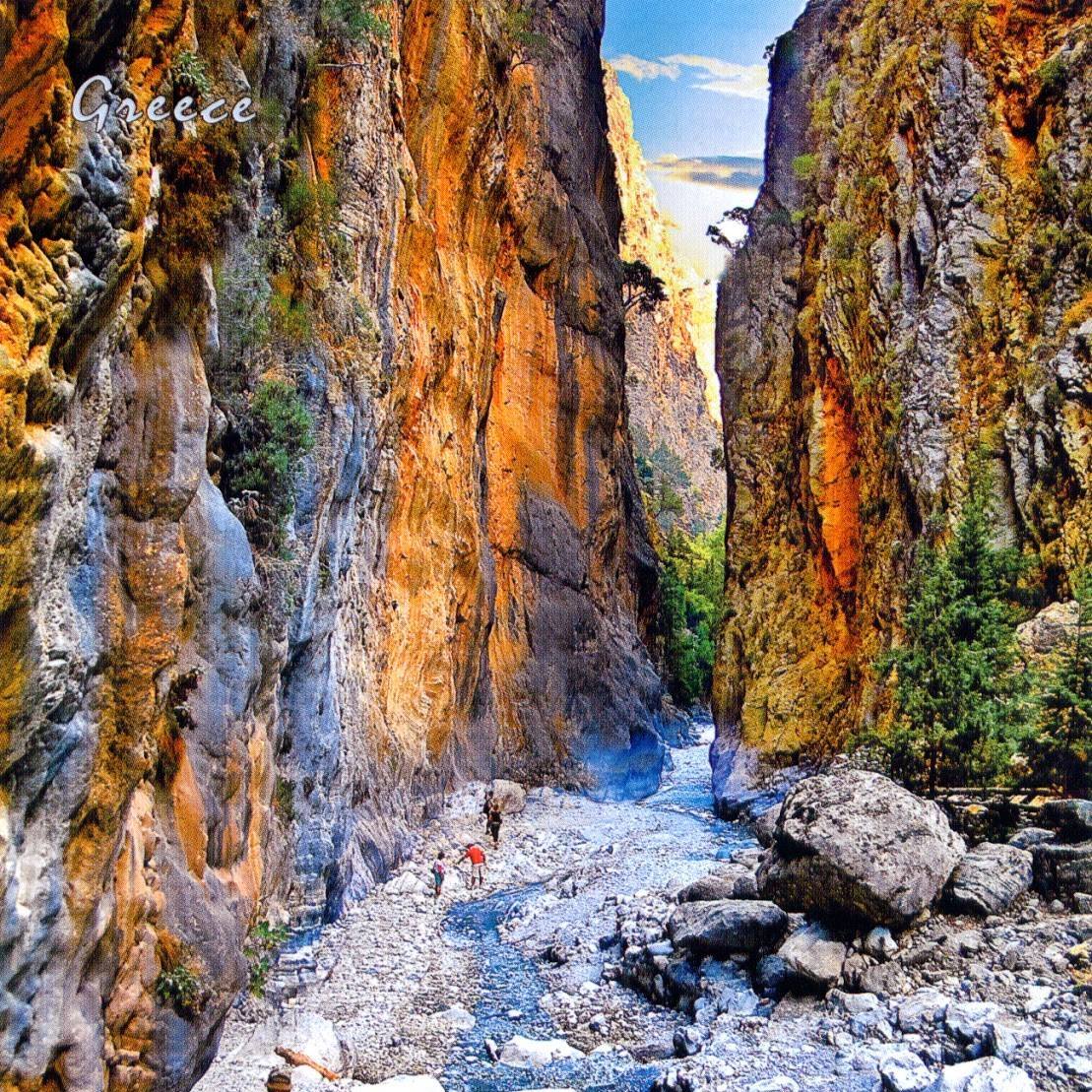 This Chania harbor in Crete was built between the years 1320 and 1356 by the Venetians and was an important trade center until the early 20th century. Today, Chania’s old harbor is still used by smaller boats and yachts. The harbor’s crowning jewel is its lighthouse, which was built by the Venetians around 1595 to 1601, and is one of the oldest in the world. Being one of the most common tourist attractions in Chania Crete, most people come here to enjoy a stroll through the harbor, have breakfast with a view of the lighthouse, or enjoy a meal in one of the many local restaurants of Crete.

The Heraklion Archaeological Museum is said to be one of the most interesting and important museums in Greece. Visitors to this museum can find fragments of the original frescoes from the Minoan Palace of Knossos. The Heraklion Archaeological Museum also has exhibits dedicated to all of the periods of Crete’s prehistory and history, up until the late Roman periods. Undoubtedly one of the most interesting attractions in Crete.

Spinalonga is an island fortress on the southwestern entrance to the Gulf of Elounda in Crete. It used to be part of the nearby Peninsula Spinalonga, however, in 1526, the Venetians cut a canal through it to separate the two. The island was also fortified and, for many years, was the first line of defense for Elounda. From 1903 to 1957, Spinalonga was used as a leper colony for people from all over Greece who were suffering from the disease. Today, Spinalonga is just a short boat ride away from both Elounda and Agios Nikolaos and is popular with tourists, who come to the island to see the remnants of the abandoned leper colony, the fortress and numerous old structures. However, visits to this island are limited to a few hours, as there are no accommodations on Spinalonga

The Arkadi Monastery was the site of one of the most tragic incidents in Crete’s history. In 1866, the Cretan residents, who were then under Turkish rule, decided to revolt. At one point during the rebellion, more than 940 Greeks, mostly women and children, took sanctuary in the monastery. The Turks lay siege to the monastery for three days and were finally able to break into its gates. At that point, the refugees decided to end their lives rather than be taken prisoner and blew up barrels of gunpowder, which ended up killing hundreds of Turks and Cretans. The incident sparked sympathy and worldwide attention for the plight of the people of Crete. The monastery, which has been around since about the 12th century, was restored in 1870.

One of Europe’s biggest aquariums, is located in Heraklion Crete and is called Cretaquarium. It first opened in 2005 and gives visitors a glimpse of the unique sea world. From a plethora of marine organisms such as fish, sharks, jellyfish and even tiny sea horses, the aquarium displays the rich diversity of Mediterranean marine life. A fun activity for visitors of all ages, Cretaquarium is a must-see when visiting Crete.

The imposing fortress of Koules, also named Rocca al Mare, is a Venetian structure standing in the old port of Heraklion Crete. Built in the early 13th century, the fortress is one of the most recognized monuments in the city and the symbol of Heraklion. Today, the fortress is open to the public and often hosts exhibitions and cultural events.

Visitors will find the Psychro Cave, also known as the Diktean Cave, in the eastern part of Crete, just outside the village of Psychro. If it weren’t for its mythological importance, the cave wouldn’t be much different from the other 3,000 caves located on the island. But the Psychro Cave is much more than a simple cave. Legend states that it was the place where the goddess Rhea gave birth to Zeus. With such significant importance, it’s no wonder that the cave still attracts thousands of visitors today 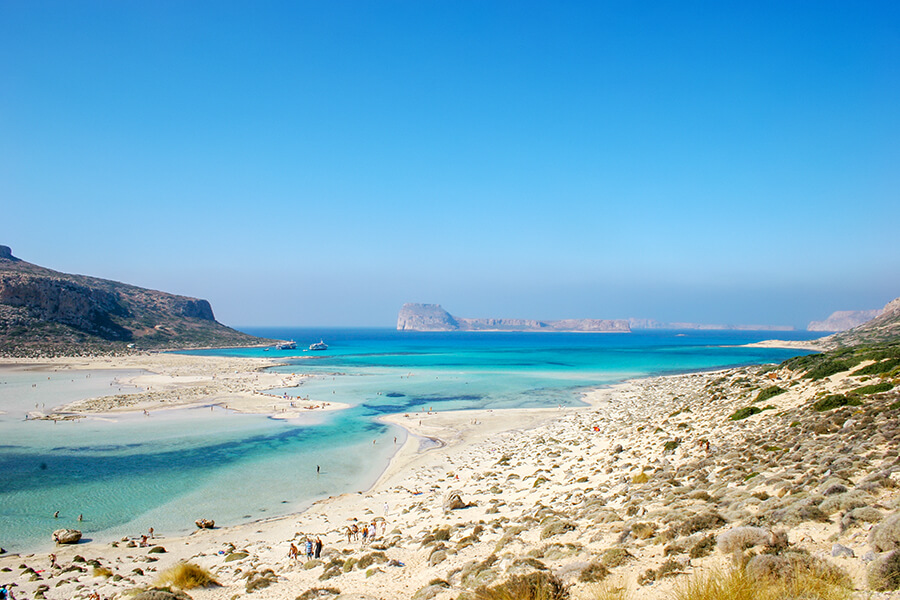